(Motorsport-Total.com) – Shortly before the end of the 2022 Brazilian Grand Prix in Sao Paulo. Max Verstappen received an unmistakable radio message from his race engineer Gianpiero Lambias: “Maxi, let Chec pass.” But that’s exactly what Verstappen doesn’t do: After 71 laps of the race, he crosses the finish line ahead of Perez and finishes sixth, Perez is seventh. And the situation immediately escalates.

Perez, who had also been informed shortly before that the trade would be made, reacted bitterly on the radio: “Yeah, thanks for that, boys! Thanks!”

But Perez has heard enough and says simply, “It shows who he really is!”

How Verstappen justifies his behavior

And Verstappen? He also reports on the radio, but he is not aware of any guilt – on the contrary: “I told you the other day. Don’t ask me about it again, okay? Is it clear? I gave my reasons. And I stand by it.”

But the two-time Formula 1 world champion is silent about the reasons. Later in his press rounds, he merely repeated what he said on the radio: “Well, I have my reasons.” Speaking to ‘Sky’ England, he added: “The [Gründe] I don’t want to name it here.”

Asked if something had happened to explain his behaviour, Verstappen replied: “Yes, that’s it.” He doesn’t say more about it.

Tom Coronel, a Verstappen family expert and Formula 1 expert on Dutch TV, believes he knows the background and suggests on “ViaPlay” that Perez allegedly deliberately caused the crash in qualifying for the Monaco Grand Prix and later did it. he conceded the leadership of the team around Helmut Mark and Christian Horner. Verstappen has not forgotten the incident.

What exactly happened in Monaco in 2022: Perez actually had an accident in the final of Q3 qualifying, a good half a minute before the time limit in the pass before the tunnel entrance. Because of the incident, no one was able to improve their lap times, not even Verstappen – and the next day Perez started the race from 3rd, just ahead of Verstappen.

Perez “has no idea” what Verstappen is up to

So far, no one at Red Bull has confirmed whether exactly what Coronel claims is the trigger for Verstappen’s displeasure. Asked about Verstappen’s “reasons”, Perez just shrugs and says he has “no idea” what moved his team-mate. “Maybe they should ask him about that. But yeah, I have nothing to say about that.”

Postscript: “I’m really surprised. After everything I’ve done for him, it’s a little disappointing to be honest.”

In an interview with a Spanish television station, Perez was even more open, saying: “If he now has two world titles, it’s because of me.”

Last but not least, Perez should mention his support in the final race of 2021 in Abu Dhabi, in which he first stopped Lewis Hamilton and later even abandoned the race on the instructions of Red Bull, so as not to be a factor that could reduce Verstappen’s chances. .

Now in Brazil, he got a clear message from the team in the closing stages when Verstappen overtook him. “I was told to let him pass and I would get the position back,” Perez said. “I don’t know what was discussed with him.”

Photo gallery: Formula 1 2022 in Brazil: The most important thing about Sunday

The latter was one of the topics of a spontaneous crisis meeting of Red Bull in a narrow circle. Team boss Horner, sporting director Marko and Verstappen’s manager Raymond Vermeulen were there. The drivers were also present. Horner reveals, “They discussed it and shook hands.”

Red Bull has not released any further details. Marko doesn’t even want to answer on ‘ORF’, but cuts off the conversation and goes on to ‘Sky’, where he repeats several times the wording that was probably agreed upon after the crisis meeting.

Marko only says: “Max will do everything in his power in Abu Dhabi to get Checo to second place in the World Cup. That’s done and settled. And we go to Abu Dhabi with that assumption.”

Asked if Verstappen had not behaved like that in Brazil, Marko said without answering the question: “That is our statement and our plan for Abu Dhabi.”

‘Sky’ again asks if Verstappen has shown himself unworthy of the world champion, where Perez has supported him several times. Marko: “Again: Now what happened was discussed. Everything became clear internally.”

“We are working as a team and the premise is Abu Dhabi and Max will do everything to get Sergio second place. That’s all I can say.”

Horner also did not respond to inquiries

Horner uses a similar, if slightly different, vocabulary when stepping to the microphone on ‘Sky’ England. Tam says: “We are discussing something internally. The drivers have also spoken about it. They have a very clear opinion.”

“Checo is now on the same level as Charles. Now we go to Abu Dhabi as a team to do our best to get Checo second place. Max will fully support that.” 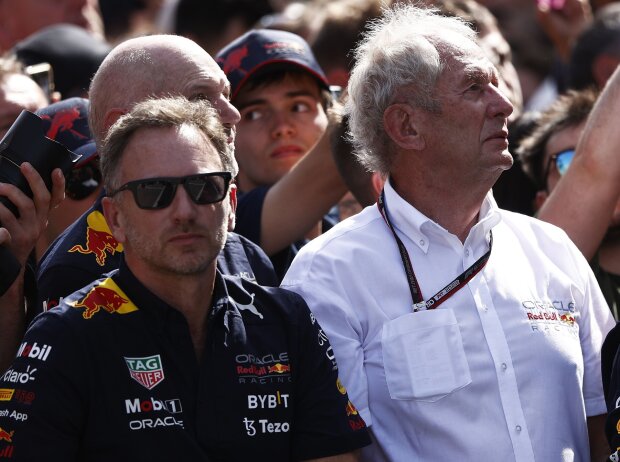 Christian Horner and Helmut Marko are cautious about the situation Enlargement

Horner also rejects all questions: “I will not say what was discussed behind closed doors. The drivers discussed it and shook hands. We are fully focused on the next race.”

“We’ll discuss it in the larger circle at the debriefing. The larger discussion is why we lacked pace today and this weekend. Everything comes out on the table. And then it goes on.”

Horner: Red Bull have only one target now

What follows is the provocative question of whether Verstappen feels he is bigger than the team when he behaves like this. Horner says no: “We work and race as a team.”

“Our aim is to give Checo second place in the World Championship. We’ve never achieved that as a team. Max is behind it. We’ll do our best in Abu Dhabi. It’s a straight fight between Checo and Charles. If Max can help in any way, he will.”

That’s what Verstappen is now saying. He welcomed the ongoing debate. “Because we put everything on the table. Of course I understand Chec’s perspective as well. He’s disappointed. But I also gave my reasons for not doing it – because of a past incident.”

There is now an “understanding” in the team, Verstappen stresses. “Now let’s look ahead. Checo and Charles are going to Abu Dhabi tied on points. And if he needs help to finish ahead of Charles, then I’ll help him.”

“It’s not the end of the world. It all depends on who finishes before who. And if he needs help, I’ll be there.”

“But it’s good that we talked about it. It clarified everything that was in the room and why I didn’t do it,” says Verstappen.

For refusing to run the stables in Brazil, Ralf Schumacher confirms that Verstappen, like his father Jos Verstappen, has “a bit of a street brawler mentality, a bit of selfishness,” he says in ‘Sky’.

“Of course: He’s super successful, but something like that can cost you even the support in the team, and I don’t know if it’s worth something like that. Well, humanly, and also as payback, it’s not entirely clean, I have to say that very clearly.”

“I think Sergio Perez has in his first year [bei Red Bull] he proved how much he can fight for the team and how much [Verstappen] helped him. I think it would be payback time.”

Team boss Horner seems to think the same way, at least when it comes to Perez’s abilities. Because he says: “Checo has done a fantastic job this year. He deserves this second place. We will do our best as a team to support him to achieve this.”