A new beta version of LEGO Build a Minifigure has started in the LEGO Online Store. There you can now assemble your own minifigure online from a range of parts and have it sent to your home.

Even before the merger of LEGO Bricks & Parts and LEGO Pick a Brick, LEGO announced that it would also offer the popular Build a Minifigure tower in LEGO stores as a digital version. Now the program has started in an early beta, so you can click your own numbers online.

Also available via the direct link in the LEGO Austria Online Shop and the LEGO Switzerland Online Shop.

You can assemble your own LEGO Minifigure on the Build a Minifigure page of the LEGO Online Shop. Cost of 3 figures €6.99 and each further €2.33 extra.

A figurine consists of:

The figure designer also assembles the body parts directly together, allowing front and back views of the figure’s appearance. You can also have designs put together and then change them using a “randomize” button.

The range of minifigure parts from which to build your own character isn’t huge, but that could also be because it’s still in beta. In each category, there are currently around 30 items for you to choose from. Among them are interesting pieces like the Dachshund, Chameleon or Chicken, and even pieces that were previously only available in Build a Minifigure Tower in LEGO stores, like the Lion Knight Shield in Blue and Red.

In the gallery you will find a selection of the available pieces:

Just like with LEGO Pick a Brick orders, minifigures count towards free minimum purchase values ​​and also earn VIP points. Shipping costs – as long as the basket is less than 55 euros – 3.50 euros and should according to the LEGO online store 11-15 business days last. 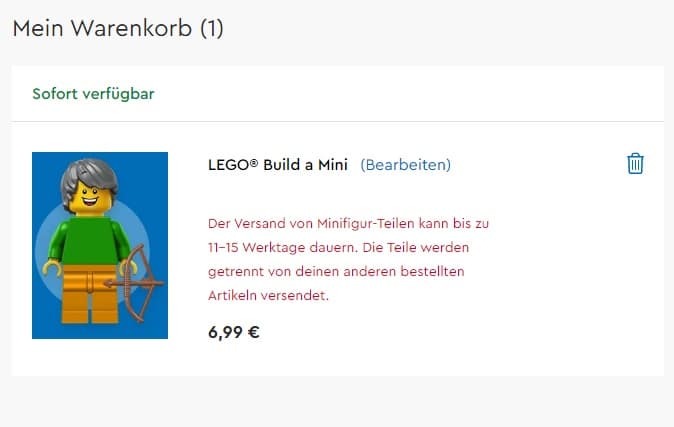 What is your first impression of LEGO Build a Minifigure Designer? Do you like the beta and would you like to create your own characters? Give us your opinion in the comments!